When is the Chinese Valentine's Day? How is it celebrated? What are the traditions? 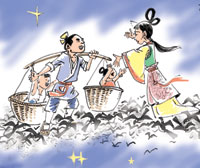 The Chinese Valentine's Day (七夕节, 织女节) is on the 7th day of the 7th lunar month in the Chinese calendar. Raise your head in evening on this day and gaze at the stars, you will find something romantic going on in the sky.

That is, on this evening, Niu Lang and Zhi Nu will meet on a bridge of magpies across the Milky Way. Chinese grannies will remind children that they would not be able to see any magpies on that evening because all the magpies have left to form a bridge in the heavens with their wings.

The Chinese Valentine's Day falls on the following dates in the Western calendar - mark on your calendar: 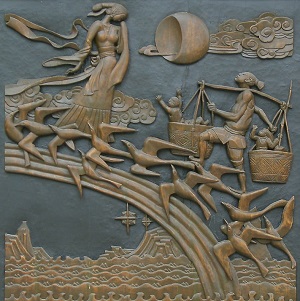 The legend has been handed down for nearly 2 millennia. The story has been recorded as far back as the Jin Dynasty (256-420 AD). Poets composed hundreds of verses on the love story and many types of Chinese opera tell the story.

Zhi Nu was said to be the youngest of seven daughters of the Queen of Heaven. With her sisters, she worked hard to weave beautiful clouds in the sky, while Niu Lang was a poor orphan cowherd, driven out of his home by his elder brother and his cruel wife.

Niu Lang lamented over his lonely and poor life with an old cow, his only friend and companion. The magical cow kindly told him of a way to find a beautiful and nice woman as his life companion.

Under the direction of the cow, Niu Lang went to the riverside on an evening, where the seven fairies slipped out of their heavenly palace to bathe.

He took one of the beautiful silk dresses the fairies had left on the bank. When the fairies left the water, the youngest couldn't find her clothes and had to see her sisters fly back to heaven without her.

Then Niu Lang came out with the dress and asked the youngest fairy, Zhi Nu, to stay with him.

Several years passed on Earth, which were only a few days in heaven. Niu Lang and Zhi Nu lived happily together and had two children before the Queen of Heaven discovered Zhi Nu's absence.

She was so annoyed she had Zhi Nu brought back to heaven. Seeing his beloved wife flying in the sky, Niu Lang was terrified. He caught sight of the cowhide hanging on a wall. The magical cow had told him before dying of old age: "Keep the cowhide for emergency use."

Putting the cowhide on, he went after his wife with his two children.

With the help of the cowhide, Niu Lang was able to follow Zhi Nu into heaven. He was about to reach his wife when the Queen showed up and pulled off her hairpin to draw a line between the two. The line became the Silver River in heaven, or the Milky Way.

Zhi Nu went back to the heavenly workshop, going on weaving the clouds. But she was so sad, and missed her husband across the Silver River so much that the clouds she weaved seemed sad. Finally, the Queen showed a little mercy, allowing the couple to meet once every year on the Silver River.

The seventh day of the seventh lunar month is the only Chinese festival devoted to love in the Lunar calendar.

Unlike St. Valentine's Day in Western countries there is not so much emphasis on giving chocolates, flowers and kisses. Instead, Chinese girls prepare fruits, melons and incense as offerings to Zhi Nu, the weaving maiden, praying to acquire high skills in needlecraft, as well as hoping to find satisfactory husbands.

In the evening, people sit outdoors to observe the stars. Chinese grannies would say that, if you stand under a grapevine, you can probably overhear what Zhi Nu and Niu Lang are talking about. 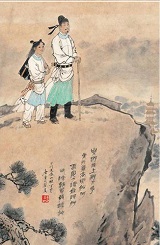 Mid Autumn (Mooncake Festival) - 15th Day of 8th Lunar Month
When is the Chinese Mid Autumn Festival? How is it celebrated? What are the traditions? Mooncake Festival ('Zhong Qiu Jie' 中秋节) The mooncake festival (Zhong Qiu Jie) falls on the 15th day of the eighth lunar month. It is an occasion for family members to get together over mooncakes, fruits and fine... 2021-08-26, 591👍, 0💬

Qingming Festival - 1st Day of 5th Solar Term
When is the Chinese Qingming Festival? How is it celebrated? What are the traditions? The 1st day of the 5th solar term is the Qingming (Chinese: 清明节, 清明節) for people to go outside and enjoy the greenery of springtime and to tend to the graves of departed ones. Qingming Festival is the 15th day af... 2021-08-13, 533👍, 0💬

This section provides a tutorial example on how to download and install JDK 1.6.2 (Java SE 1.6 Updat...

This section describes how to connect to a DSN (Data Source Name) with JDBC-ODBC Bridge.